What Will Happen to the All-White Church in America? Ten Trends in the Next Ten Years

Demographics tend to change slowly. You can see the patterns emerging, and, for the most part, you can know what is coming years in advance. Most people do not pay attention to these gradual shifts because it does not have an immediate impact on their lives.

Then we hit an inflection point, and everyone seems to notice.

1. The white population declined for the first time since 1790. All the nation’s growth is attributable to people of color. Almost every county in the United States grew in diversity the last ten years. In other words, this trend is occurring in your community whether you choose to see it or not.

2. The youngest generation is now minority white, meaning white children under 18 make up less than 50% of their respective age group. Around 2040 the entire nation will become minority white. 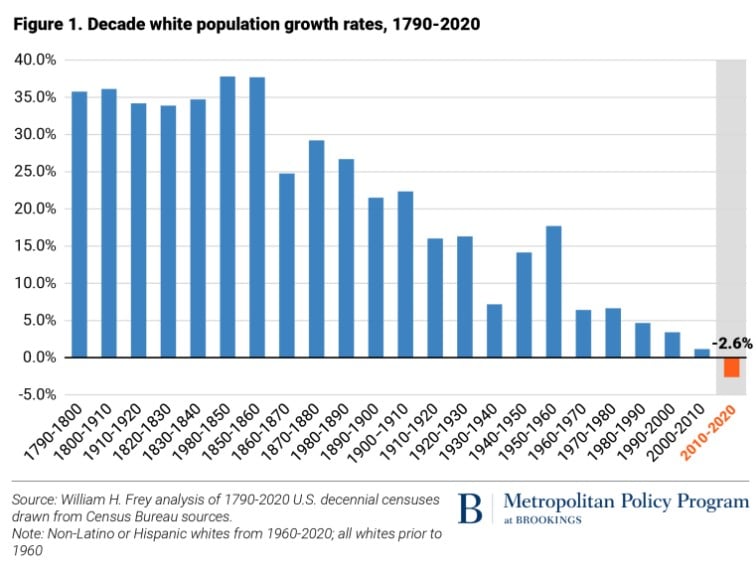 As you can see in the above chart, this demographic trend has been in place for some time, but the inflection point is now. I started writing about this reality over ten years ago. We’ve arrived at the place demographers predicted.

Why does this trend matter to the church?

As the demographics change in the community, the same demographics must be reflected in the local church. You should reach your neighbors! While it may seem like common sense, unfortunately, it is not common practice. Many all-white churches are not ready to be ethnically diverse. My focus is on the all-white church in this article because two generations prior the United States was 87% white. The sheer number of all-white churches means this shift will have a profound impact in the coming decade.

Is a day of reckoning coming for the all-white church? It’s less about a specific point in time and more about a gradual fading. What do the next ten years look like? Here are ten trends to consider.

1. Growth in most all-white churches will not occur because the parents are having more children. Biological growth will continue to slow in all-white churches. Not only did the absolute number of white people decline in the United States, but there were also significant declines in the number of white children born here. The birth rates among white families are significantly lower.

5. Some all-white congregations will continue to thrive in areas where they reflect the community. Parts of the country are predominantly white and will remain so for the next ten years. All-white churches in these areas will be the least impacted.

6. Most multi-ethnic churches will grow gradually, not exponentially. The predominantly white churches that begin an intentional process of becoming more diverse will not grow overnight. However, much progress can be made gradually over a decade.

9. Geography will matter less in the future than in the past. Diversity was once an urban reality, but it is now everywhere. All-white churches in every community should pay attention to this trend.

10. Racial tensions will still exist in our churches and in society at large. Racism is a sin, which means it is not going away in the next ten years. Satan will continue to use skin color to divide us. But the church has an opportunity over the next ten years to demonstrate a little taste of heaven.

Will a massive wave of multi-ethnic churches form in the next decade? It’s possible, but there are headwinds. Many cities are diverse, but the individual neighborhoods within them are still segregated. As mentioned previously, demographic trends change slowly. By the time Gen Z starts having grandchildren, however, I believe the all-white church will be more the exception than the rule in the United States.

Where can you start? How diverse is your community already? Most people are shocked when they look at the data. If you don’t know your community, then you can’t reach your community. Church Answers has created a resource to help. It’s called the Know Your Community report. We offer this incredible demographic and psychographic report to help you reach and love your community.

The post What Will Happen to the All-White Church in America? Ten Trends in the Next Ten Years appeared first on Church Answers.

Although I do not hold to the big bang view,…

The first original TV series about the life of Jesus…

Peace unto all, How was this and similar images determined…