Anthropologist ‘confirms’ Apple is a religion 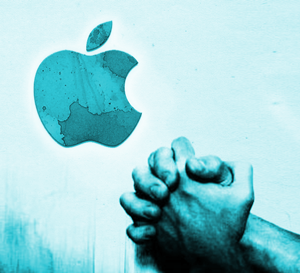 Think religion, think ritual: history, perhaps sacred writings, proscribed sets of moral laws, and potentially a sacrifice or two. There are plenty of organizations and cultures around the world that claim they adhere to a certain set of beliefs, but could adoration and a cult following for a technology firm be the next step?

The University of British Columbia’s Dr. Kirsten Bell believes that much of the aforementioned applies to Apple. After observing launch videos, and recently attending the iPad mini launch for TechNewsDaily, the social anthropologist said that Mac fandom has some strikingly similar parallels between a religion or cult status:

A stranger observing one of the launches could probably be forgiven for thinking they had stumbled into a religious revival meeting.

Before specializing in the biomedical field, the research fellow conducted fieldwork on new religious movements in South Korea until 2005. Based on this experience, Bell believes that Apple is “littered with sacred symbols” — most notably, the iconic Apple logo. (Ironically, some believe the bitten Apple is “anti-Christian”).

It’s not like any other firm uses a logo for representation, or goes through the revamp process to stay modern and recognizable. Oh, no.

There are a number of theories surrounding what makes a religion, and what separates ‘cults’ from the former revered nametag. For the sake of argument, in anthropological terms, these suggested principles of a “cult” are worth keeping in mind:

So, what does Bell say? And are Apple fanboys really ‘cultish’?

Point 1: “A charismatic leader who increasingly becomes an object of worship as the general principles that may have originally sustained the group lose their power.”

A crucial component in structured religious organizations, from Christianity to Scientology, a charismatic leader is necessary to preach a point or sway a crowd. Where do these leaders come from in Apple? Bell’s answer is simple. During keynote speeches, each Apple executive “addresses the audience to reawaken and renew their faith in the core message and tenets of the brand [or] religion”.

Feel free to also compare the creation myths of Christianity and Babylon to the founding of Apple and Steve Jobs, but anthropologist to anthropologist, I’m fairly sure that’s called “public relations,” — I’m sure you know, where one tries to make consumers and businesses alike excited about a product or service a company is promoting, in order to make money or gain decent press exposure.

If your fans are passionate, great. It’ll mean they may not be so angry about spending hundreds of dollars on an iPad made obsolete just over half a year later.

I’m also yet to see a loss in power from Apple itself. The technology giant is one of the most popular and powerful technology companies on the planet, and in spite of its founder’s death, the firm shows no signs of slowing down without such an iconic figurehead.

It’s only in the moment an Apple executive asks the crowd to bow and send their prayers to an iPhone that I will begin to worry.

Point 2: “A process which may include coercive persuasion or thought reform.”

Apple traditionally does not broadcast its launches live — although its latest media event was available on the company’s website — though this anomaly in practice also came under scrutiny from Bell. “Like many Sacred Ceremonies, the Apple Product Launch cannot be broadcast live,” she wrote. “The Scribes [and] tech journalists act as Witness, testifying to the wonders they behold via live blog feeds.”

Ah, a wonderful new shiny has been released, time to empty the bank account and remortgage the house. Sorry honey, Apple told me to do it. It’s morally the right thing to do.

“Sacred ceremony” aside, the point of product launches is promotion — to show a product in its best light — make consumers aware of its existence, and entice people to prise open their wallets. If this is a “wonder to behold”, then naturally people are going to want to buy it.

Apple doesn’t coerce their customers, or fill their heads with brain-washing thoughts. Wait until the iPhone and iPad maker has their own floating version of Scientology’s Sea Org used as a religious retreat. Until then, the jury’s out on the wonders of the iPad manipulating the general public.

Point 3: “Economic, sexual, and other exploitation of group members by the leader and the rulers”

Sexual exploitation is out of the running here, so let’s take a look at the economics of a so-called “cult”. Scientology lets you increase your ‘thetan’ (or ‘god’) level by contributions to the organization, the Church once ruled and taxed with an iron fist, and Apple wants you to buy its products. What’s the difference? Apple is a business. It’s sole purpose is to make money. It promises you a product and level of service, nothing more.

If you don’t buy the new iPhone, your firstborn son won’t be taken — relax.

If Apple releases a subpar product, consumers will knock it off the tech pedestal. Nokia used to be the ‘king of the cellphone’, but as it failed to keep up with the expanding smartphone market, rivals Apple and Google exploited the market weakness.

It’s feasible that if Apple failed to keep up with consumer trends and its popularity waned, fewer people would buy its products. That’s business 101, and consumers would find a new darling of the tech world.

But what other factors are there to consider if you try to compare a technology firm to a religion or cult? Although Bell says the comparison is “superficial” as religion has a different purpose to business, where one tries to explain life’s questions and another tries to make money (I guess Scientology’s out then, ‘thetans’ and all…) Bell observes that Apple is more than just about selling a smartphone or tablet:

Is Apple Your God?

Apple is a new religion

The global battle over free speech and religion on the Internet

The Pope’s Push for a One-World Religion