Christmas in the Isaacs household 2006 version! 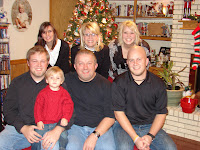 The Isaacs clan (Bill/Kathy version) arrived on Sunday night and we have had a BLAST together. Everyone is growing older and Cooper is now at an age where communication is clearer and Christmas morning is exciting for him. Of course, he got the motherlode of gifts and candies...but all had a great time! 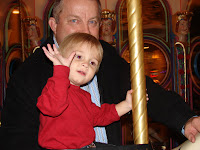 Cooper and I took advantage of Mimi's shopping and rode the carousel at the Mall of Louisiana. His favorite was the Tiger who goes "GRRR...!". We rode several times and my favorite words were "more...?" Thankfully, Uncle Jason had plenty of $$$$. He covered us. 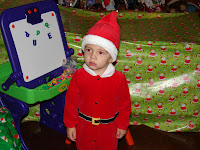 Christmas morning found Cooper in his elf outfit opening a new toddler bed, drums (his parents will love the noise), a Derek Jeter t-shirt from New York Yankees, and plenty of UNC Tarheel stuff. A big breakfast and a nap put him into a great mood for the rest of the day.