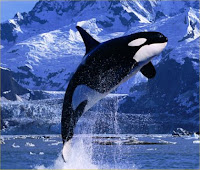 Jon 1:17 Now the LORD had prepared a great fish to swallow up Jonah. And Jonah was in the belly of the fish three days and three nights.

Even if you're not a theologian, you are probably somewhat familiar with the story of Jonah and the big fish. I guess it's only natural that the idea of a man living inside of a fish for several days captivates us. Now before you relegate this story as merely an allegory, understand that Jesus (the Son of God) interpreted the story of Jonah as being historically accurate and literal.

So not only does Jesus validate the preaching and repentance that took place in Nineveh, but He also confirms the account of Jonah in the belly of the whale. Ok- now that I've gotten that out of the way....let's proceed!

The story of Jonah and the big fish is typically applied as simply a man running from God, and God getting him to do His will. There are many preachers who can relate to the story of Jonah because they wanted to do everything else but preach the Gospel, until God finally arrested them. But I have grown to appreciate the story of Jonah beyond the obvious implications of a man running from God. To me, it's a story about a God far more Sovereign than we could ever imagine- far more merciful than we could ever deserve, and far more loving than our finite minds could ever try to comprehend (try as we might)! I'm not going to address Jonah's "vacation" to Tarshish today. Instead, I'm going to focus on 3 things the Lord did in chapter 1 of Jonah.

Jon 1:4 But the LORD sent out a great wind into the sea, and there was a mighty tempest in the sea, so that the ship was like to be broken.

This was no ordinary storm. This was not a result of atmospheric conditions being optimal for storm-production. This was a "Sovereign Storm". Now the beautiful thing about this storm, is that God designed the storm to save Jonah. Jonah has run as far as he can in the opposite direction of where God wanted him to be. But instead of allowing Jonah to "do his own thing", God pursues him. I don't enjoy the storms of life any more than you do. But I'm learning (ever so slowly) that God uses the difficulties of life to bring us closer to Him- not to destroy us!

#2- God caused the lot to fall on Jonah

Jon 1:7 And they said every one to his fellow, Come, and let us cast lots, that we may know for whose cause this evil is upon us. So they cast lots, and the lot fell upon Jonah.

These pagan men on the boat with Jonah were crying out to their gods and decided to use the method of lot-casting to discern who was the troublemaker. God intends for Jonah to go overboard, so the lot falls on Jonah. There is an interesting scripture in Proverbs that illustrates this point:

Pro 16:33 The lot is cast into the lap; but the whole disposing thereof is of the LORD.

Sometimes what seems like such a random occurrence, is not a coincidence at all! God orchestrates the events of our lives and uses whatever methods He deems necessary to get us where He wants us to be. (disclaimer: this should not be used as a proof-text for the divine approval of casting lots for decision making....it probably goes without saying but just in case.)

#3- The Lord prepares the fish

Jon 1:17 Now the LORD had prepared a great fish to swallow up Jonah. And Jonah was in the belly of the fish three days and three nights.

Instead of leaving Jonah in the sea to drown, the Lord prepares a fish to accommodate him (probably not Jonah's first choice). There are so many things I could say about all of this, but I simply want to point out the great lengths that God went to, in order to deal with this one man who disobeyed His voice.

We probably would have eliminated Jonah as a viable candidate, and selected a more suitable (and willing) vessel to carry out the assignment. But God pursues Jonah, orchestrates the events in and around his life, and gives him another opportunity to do what is right. Today, I want to remind you that God is more powerful and Sovereign than we give Him credit for. He is much more merciful than any of us deserve. And He loves us more than any of us can truly comprehend.

So whether you are in a storm, a seemingly random series of events, or in the belly of your fish- remember that God has your best interests at heart!