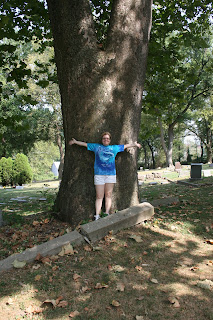 This past weekend my wife and I went for a stroll through a very old cemetery in Alton, Illinois. I used to spend hours upon hours in that graveyard, walking and reading the headstones and monuments, back from the age of eleven until I was about 14. This cemetery has a feature that few modern cemeteries do, in that when a family bought a plot of ground, they most often put a cement boarder around the section that was purchased and had the family name engraved in the cement, or a plaque with the family name might be fastened to it.
This land was set aside solely for the use of the family whose name appeared there. As a result, many of these large plots might only have one or two graves within those boarders, while there might me enough land there for 10-20 graves. I can only imagine that in time, the families moved away from the area, so the grave plots were left, unused.

In one of these family plots, there was a huge tree planted right at the corner of the families boundaries. That's it in the picture above, with my wife in it, so that you might comprehend just how big this tree is. It's a monster.
As we were standing there looking at the graves, with birth dates in the early 1800's, I thought to myself, "Someone in that family probably planted a very small tree in the corner of their parcel of ground, thinking it would one day provide shade over their graves. I'm quite sure they never gave thought to they year 2011 and how large the tree would become and the impact it would have. The roots of this tree are so massive that it has literally shifted the landscape, moving the cement boundaries, and causing small hills and valleys around it for a good 10-15 feet. The branches and leaves are gigantic, spreading shadows not only over this families grave plots, but over dozens of other family plots as well. The leaves on this tree were nearly the size of basketballs. (I'm not sure what the tree was. The leaves resembled a maple leave, but as I said, they were huge.) I found myself thinking, "If only these people could know what they started way back then and the results that stem from that simple act, almost 200 years ago."


It's been 4 days now since we visited that cemetery, and my mind keeps drifting back to it, especially to this tree. There is a life lesson in that tree. That man or woman who planted that tree really gave no thought to the future when they planted that tree... at least not beyond the future of their immediate family. But long after they have gone... nearly 150 years later, the fruit of that little seed is still growing, still producing results.... still effecting everything around it. That's the way our lives are. We seldom stop to think of the long-term effect of our decisions and actions... but even though we don't think of them, the ripple effect carries on, long after we have forgotten what began it all. I wonder, how many things might be different if we stopped and thought about the long term effect of our actions or words and how they might alter the future? It's a thought worth pondering.