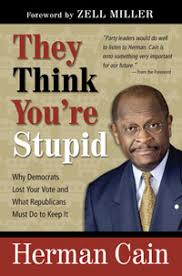 So, unless you've been in a box or an uncharted island, you have witnessed the rises of Herman Cain and the destruction of the same. Herman has been around for a long time, briefly in the public spotlight at times, (such as when he single handily caused Hillary Clinton's health care plan to end in a train wreck) but for the most part, he has never been in the national spotlight. Folks in the Atlanta area knew of him because of his radio talk show. Tea Party crowds got to know him from his speaking at their rallies. But then came the GOP Presidential primaries and all of a sudden, people were asking "who is this man" as everyone got to know "9-9-9". Cain went from a relative unknown to a GOP front runner.  Interestingly enough, the media never did  give Cain his due. Even Fox News refused to acknowledge him as a front runner. When he was up in the polls by a couple of points over Mitt Romney, they still called Romney the front runner. I cannot tell you the number of times I would become enraged at the snub job that was done on Cain. When he did not go away and his poll numbers held or increased, they would be forced to acknowledge him, but all the time pointing out how other had risen in the polls, only to fall. It was painfully obvious that the powerful forces behind the media did not want Herman Cain to be the next President. Still, he held his own... until the attacks began.

We all witnessed how accusations of sexual harassment in the workplace began to surface. First one, then another, and then another. Finally one came out in a press conference that was just silly to watch. I mean, if you had been sexually harassed, would you need to read from a paper to tell about it? Would you giggle all the way through it? Would you get yourself a shyster attorney to stand with you as you went from press conference to press conference to talk shows? It was a smear job. Then another comes out, and then the two of them (and supposedly a third) announced they would be doing a joint press conference. Cain's poll numbers sank quicker than a rock in a pool... and suddenly the women disappeared... and no press conference ever came about. Their work was complete. Then, unexpectedly, Cain's numbers jumped again, and in the Rasmussen National Poll, he retook the lead. As if on cue, two days later, another woman comes to the forefront with accusations of a 13 year affair with Cain. Again, his poll number sank, and it appears America has forgotten all about 9-9-9 and Herman Cain, with his numbers dropping from 32% a week ago to just 8% in the newest poll.

Here's the thing... NOTHING has been proven! The Atlanta Journal Constitution reported this week that of the more than 70 text messages between Cain and his accuser, only 17 were sent by Cain, and ALL of them where in response to the repeated messages from her. The AJC asked this woman's attorney and he admitted that the text messages she had sent to him was trying to manipulate Cain to give her more money. When he refused, she came out with the accusations of an affair. So again... accusations, Cain's denial.... NO PROOF... but the man is effectively out of the race. Go figure. Rush Limbaugh, who has not been a fan of Herman Cain at all was forced to admit yesterday that it looks as if this has been a carefully orchestrated smear job to get him out of the race.  What absolutely takes the cake is that Newt Gingrich, who we know has had affairs and left his wife while she was fighting cancer to be with his mistress... is now the poster boy of the GOP. HUH?
Today, an article in the Wall Street Journal speaks of Gingrich's past mistakes and says that with the mess America is in, no one cares about his infidelity or other mistakes... and the only focus is on if he has the answer for America.
So wait a minute... Cain is destroyed and out of the race because of accusations... with no admission or proof... yet Newt who has a track record of being a slime ball is given a pass because he has the answers?

I smell a rat.
I'm betting that once Cain is out of the race, the attacks on Newt will begin and one of two things will happen. If they cannot knock him down in the GOP race, in the National elections, Obama will go after him with a vengeance and Obama sweeps into office for a second term.


Herman Cain wrote a book entitled, "They Think You're Stupid."
Sadly, "THEY" appear to be right.
America is stupid and they've taken the bait.