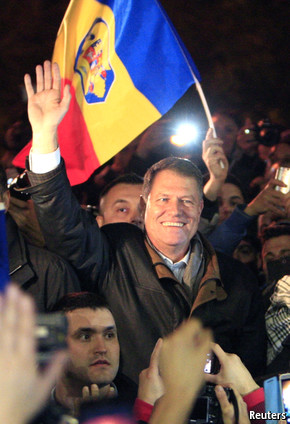 AS VICTORY speeches go, it was the least bombastic that Romanians had heard in a long time. “The campaign is over, we made our choice. Now let’s get to work. I am very serious and determined,” said Klaus Iohannis, the liberal mayor of Sibiu, in Transylvania. He is the first Romanian from the country’s ethnic German Protestant minority to be elected president. That is quite a shock for such a conservative, majority-Orthodox country.

That Mr Iohannis won on November 16th was thanks largely to a turnout of 62%, the highest in 14 years. This reflected a protest vote against Victor Ponta, the Socialist prime minister who was the front-runner in all the opinion polls and ran a fiercely nationalist campaign. Another factor was the sight of thousands of Romanians abroad (mainly Iohannis voters) queuing for hours at overcrowded embassies and unable to cast their votes, which encouraged more voters at home. Despite protesters against Mr Ponta claiming electoral fraud, Mr Iohannis emerged as a big winner, with 54.5% of the vote.

“Mr Iohannis’s German ethnicity proved an asset not a burden. Germany has not ceased to be admired as a modernising force in this part of Europe,” says Tom Gallagher, an Edinburgh-based political analyst. He adds that Mr Iohannis’s record in Sibiu eclipses anything that Mr Ponta managed as prime minister. Mr Iohannis promises to “change the way we make politics,” with a focus on the rule of law and safeguarding the independence of the judiciary, perceived as vulnerable had Mr Ponta won. He wants to stick to a strongly pro-Western foreign policy, after attempts by Mr Ponta at opening up to China, and to a lesser extent, Russia.

With a general election due only in late 2016, the new president must now work with a Ponta-led government. The first signs are encouraging: Mr Ponta was gracious in defeat. One of the president’s promises has already been fulfilled with the withdrawal of a draft bill that would have freed convicted criminals, including high-level politicians jailed for corruption. The Romanian parliament has also lifted the immunity of several MPs under investigation for corruption.

Mr Ponta has vowed to work with Mr Iohannis. He sees no reason to resign. He has told party rebels to “have the wisdom to shut up” and insists that, as long as he has a big parliamentary majority, he will carry on as prime minister. But he has taken a one-week holiday, citing his sadness after losing the presidential election.

“The main goal of these elections has been fulfilled: not to give the entire power to Mr Ponta…what comes next is a cohabitation which is likely to run more smoothly than with the outgoing president, Traian Basescu,” says Cristian Ghinea from the Romanian Centre for European Policies, a Bucharest think-tank. He says the most pressing challenge for the government is the budget for 2015, since the figures for this year were massaged to look good for the election. “They managed to hide the budget deficit this time, but they won’t be able to do so next year,” says Mr Ghinea.

The economy was a big election issue. Mr Iohannis accused Mr Ponta of driving Romania into recession. Mr Ponta riposted with figures from the statistical office (ahead of publication) showing that GDP rose by 1.9% in the third quarter over the previous one. The IMF, whose precautionary loan programme with Romania is due to expire next year, is urging the government to keep a tight lid on spending. In the campaign Mr Ponta promised an increase in pensions next year and accused Mr Iohannis of wanting to slash them. Ironically, it may now fall to him as prime minister to push through more cuts in 2015.

My Latest Book “Chronicles of the Sacred Mountain”