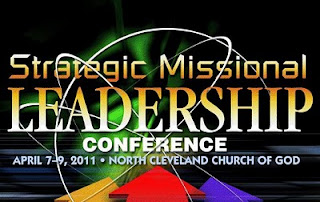 Having concluded my work and participation at the Strategic Missional Leadership Conference in Cleveland, Tennessee (April 7-9, 2011), I am now en route returning home to Maine.

It is my understanding that mp3's of the sessions will be made available online. I'll post links right here at DrawNear.org when the audio files for those sessions have been released. My workshop sessions covered the following topics:
At the conference, I also had the opportunity to introduce two of my books:
Due to the death of Dr. Ray H. Hughes and the memorial service that took place on Thursday morning, I did not speak in chapel at the Pentecostal Theological Seminary as originally scheduled. What a blessing it was to be able to attend Dr. Hughes' funeral. It brought back several great moments and memories that I had with him over the past six years during the time that we lived in Cleveland, Tennessee.