The Pew Forum: Protestants no longer majority in U.S. 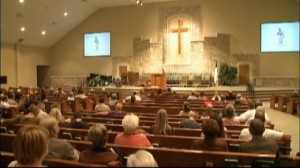 A new study by the Pew Forum on Religion & Public Life found that Protestants now make up 48% of Americans, compared with nearly two-thirds in the 1970s.

The decline, concentrated among white members of both mainline and evangelical denominations, is amplified by an absence of Protestants on the U.S. Supreme Court and the Republican presidential ticket for the first time. ”It’s a slow decline but a noticeable one,” said Cary Funk, a Pew senior researcher. Funk said a major factor driving the decline is an increase in religiously unaffiliated Americans to 20%, up from 15% five years ago.

Two-thirds of the religiously unaffiliated still say they believe in God. But they overwhelmingly expressed disenchantment with religious organizations for being too concerned with money, power, rules and politics.The study did not give reasons fewer Americans now identify with any religion. But it presented theories that included political backlash against the religious right, delays in marriage, broad social disengagement and secularization related to economic development.

Some analysts said a softening of American religiosity could affect such areas as charitable giving and volunteerism, which traditionally have been driven by churches. Others, however, said that ideals originally identified as Protestant and Puritan have become firmly entrenched as secular American virtues. The idea of America as a “city set on a hill” — a biblical phrase — with a special destiny to lead the world to freedom and democracy remains a bedrock civic value, said Richard Land of the 16-million-member Southern Baptist Convention, the nation’s largest Protestant denomination.

“America is a nation with the soul of a church, and that soul is Puritan-Protestant,” said Land, president of the convention’s Ethics & Religious Liberty Commission. “But in terms of defining the purpose of the nation, it’s been secularized long ago.” The study was based on a national survey of 2,973 adults conducted between June 28 and July 9 using land lines and cellphones. An additional 511 interviews were conducted with religiously unaffiliated adults.

In a counterweight to evangelical Christians who tend to back Republicans, the vast majority of religiously unaffiliated Americans — who number 46 million — vote Democratic and are politically liberal, the study found. Two-thirds support President Obama, compared with 27% for Republican nominee Mitt Romney. A majority of the unaffiliated support legal abortion and same-sex marriage.

The trend toward dropping away from organized religion was evident across gender, income and educational levels. But it was most apparent in the Northeast and West and among the young, the study showed. A third of adults under 30 have no religious affiliation, compared with just 9% among those 65 and older. Mark Chaves, a Duke University sociologist of religion, said some young people turn to churches when they marry and have children.

This Is What I See God Doing